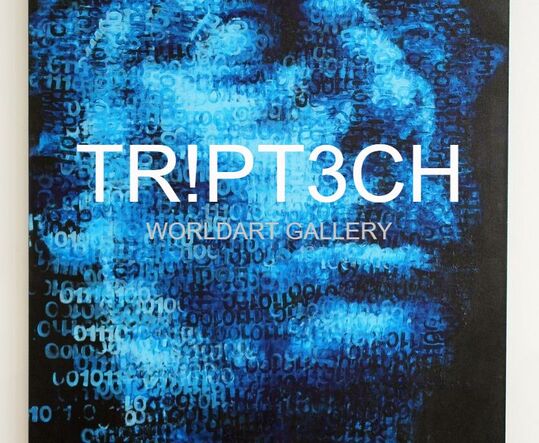 Artist’s statement
My new solo exhibition entitled ‘Tr!p3ch’ presents a series of two large scale acrylic on canvas  triptychs – ‘Binary Saints’ and ‘CTRL ALT DEL’.  The titles allure to both the source of my inspiration and my abiding interest in the contemporary digital world and its effect on human philosophy and psychology.
Following a personal encounter with Van Eyck’s ‘Adoration of the Mystic Lamb’ housed in St Bavs Cathedral, Ghent, Belgium. I was drawn to the nature of worship together with childhood memories of Sunday Mass with my Catholic grandparents.
My chosen painterly technique is the repetitive use of numerical stamps applied to create form and structure. I have chosen to use the numerals ‘1’ and ‘0’ to echo their role in binary code, the most elemental of computer programming languages. The chosen series of numerals for these works ‘010100110101010000101110’ would translate to ‘Saint’. The towering Van Eyck work, my muse, is an alter piece sealed in a temperature controlled glass box, hidden from harsh light and physical interference, similar to that of a computer server which also stores valuable and sensitive information, also history. My chosen subjects are portraits of everyday people.  My artistic practice was shaped within the digital generation and my work typically explores the idea of the ‘digital self’ and how contemporary society encourages the creation of a digital, online identity which relies on the depiction of the self through a screen or digital filter.
Society often ‘worships’ these avatars as beings separate from the physical or ‘actual’ body.
As such these works are explorations of the existential –  the very nature of human existence and ‘being’ acquires a spiritual connotation. The canonization of holy servants after death as Saints represents a transcendence  that I depict by way of a digital transformation using the elements of computer binary code.
My ‘Saints’ are the proverbial “ghost in the machine” – British philosopher Gilbert Ryle’s description of seventeenth century philosopher René Descartes’ mind-body dualism. Dualism holds that the mind is a nonphysical, and therefore, non-spatial substance.
This philosophy states that the mental can exist outside of the body, and the body cannot think. This is a position compatible with most theologies which claim that immortal souls occupy an independent ‘realm’ of existence distinct from that of the physical world. My interest in the spiritual and religious aspects of these portraits led to the depiction of a transcendence not through death but by digital transformation. I have ‘digitized them by painting them only with binary code stamps, a metaphor for when we upload an image of ourselves online. Online platforms have the ability to take one’s physical self and eclipse it with a digital/phantom self, one which garners hearts and followers. This abstract version of oneself is often viewed as more important than that of the physical self, similar to that of sainthood.
In an era of increased digital ‘consciousness’ and the dawn of artificial intelligence humanity is faced with an evolving sense of the relationship between the physical body and the mind as a separate, spiritual reality. In a modern society prone to the worship of the physical, where the Mall is the new Cathedral, my intention with these new works is to depict the portrait of the ‘self’ as the spiritual ‘ghost’ in the digital machine. Incubated and protected by the physical self but above and beyond these material constraints. The ‘Saint in the machine’.
I dedicate this exhibition to my beloved grandparents, Joseline and Claude Jacobs.
Claude Chandler